Nature, Nurture, and the Height of Racism 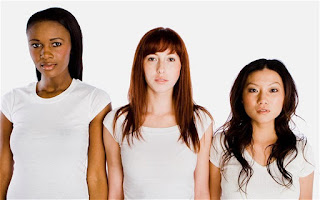 This post is not really about human height or race or nature versus nurture (though it concerns all these subjects) it is about the way in which we are so easily led astray when we think about such matters.

People from (say) the UK who go to (say) Japan (I haven’t as it happens) tend to note that the average Japanese person is shorter than the average person back home. This is certainly a recurring theme in the (sometimes borderline racist) film Lost in Translation[1] – though the visitors in that case were, of course, American.

What is the explanation for this difference? It is tempting to jump to the conclusion (as the Daily Telegraph’s questionable Short people have 'shortage' of genes - from where I stole the picture of the three women above - appears to) that it is all down to genes.

The difference in the average height of British people and Japanese people is explained by their differing genetic make-ups (QI-style klaxon should go off).

Counter-intuitively (at least if your intuitions are the same as mine were before I knew anything about genetics) this reasoning is entirely fallacious[2]. NB: This is not to say the conclusion itself is necessarily wrong. I do not actually know how much, if any, of the average difference in height between British people and Japanese people is explained by genes and I am not sure anybody really does for certain. Moreover, I do not think this is a particularly interesting topic. The reason why the reasoning presented above is wrong is, however, rather interesting.

Let us take each of the premises in turn:

1) British people are taller (on average) than Japanese people

A few years ago there was a comedy film (which I confess I’ve never actually seen) starring Arnold Schwarzenegger and Danny DeVito masquerading as (presumably) dizygotic (non-identical) twins: 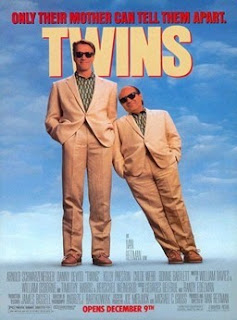 It is well established that tall parents tend to have tall children and small parents tend to have small children. Of course, we can all think of exceptions to this “rule” and if AS and DD really were twins they would constitute such an exception. In real life, we know that AS and DD are not really twins and I rather expect that AS had taller parents and DD had shorter ones. But I think we can safely assume that, even if they had been brought up in the same household and given the same diet and activities throughout life, AS would have still turned out much taller than DD. To put this into scientific terms: the variation[3] in human height across populations really is largely explained by genetics – approximately 80% of the variation according to Scientific American.

What probably strikes most British people first about Japanese people is their epicanthic eye folds – though this trait is by no means exclusively found among Japanese and other East Asian people. The trait is also sometimes encountered in “white” people in places like Poland and Finland and in “black” people and in parts of Africa in places such as Namibia. The trait is nevertheless, even if not a necessary or sufficient condition of “Eastasianess”, clearly genetic. Japanese people (unlike Brits) also tend to be lactose intolerant. This is another clearly genetic trait - albeit a less visible one and one that is also found (somewhat surprisingly) in my very Teutonic looking German nephew and, as it happens, in most of the world’s population[4]. Height in humans is, to the extent it is determined by genes, determined by lots of different genes working together in complicated ways and it is entirely possible that “tallness genes” are less common among Japanese people[5]. But the fact that Japanese people have characteristic features or eschew the consumption of lactose-rich comestibles gives us no particular reason to jump to any conclusions on the presence or absence of other genes in that population[6].

But surely, the man on the Clapham Omnibus insists, consistent differences – with respect to highly heritable characteristics (like height) – between distinct populations must be largely due to nature rather than nurture?

As the song goes, “it ain’t necessarily so” …… and here’s an explanation of why:

Imagine that the aforementioned Arnold Schwarzenegger and Danny DeVito had both really been blessed with twin brothers - monozygotic (identical) twins. Let us call them Colin Schwarzenegger and Basil DeVito. Let us further imagine that the two sets of twins were cruelly separated at birth and each paired off with one of the other set of twins: Arnold and Basil banished at birth to the otherwise uninhabited “Short Island” (an Island where there were very meagre supplies of food); and the (more fortunate) Colin and Danny to “Long Island (where food was plentiful).

On Short Island, A and B both reach adulthood but their growth is stunted: 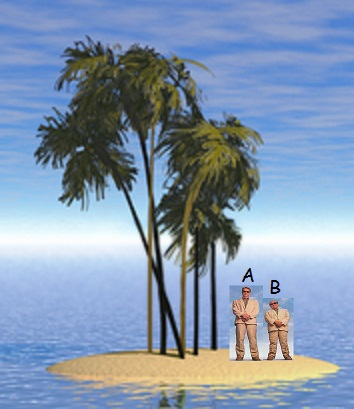 The luckier C and D on Long Island achieve their full potential (at least from a growth point of view): 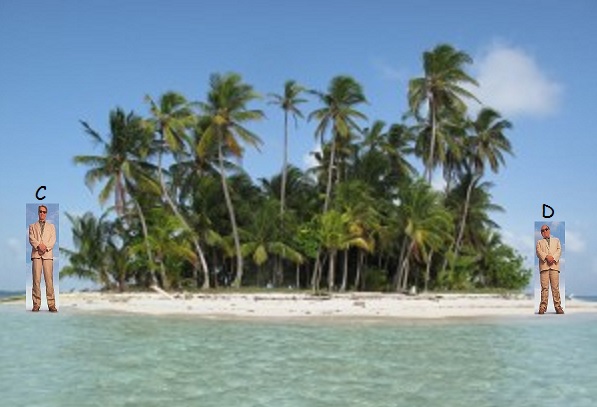 (I don’t know how they came by their suits.)

This example is, of course, rather contrived. In real life, it is far more difficult to establish whether differences within and between populations have largely (or entirely) genetic or environmental bases. But what this example conclusively demonstrates is that argument presented at the start of this post is a non sequitur. Just because there are significant differences (with respect to highly heritable traits) between nations or races (or any other groups of individuals we care to demarcate) does not entitle us to conclude that those difference are explained by nature rather than nurture.

In other words, the mere fact that differences in height within the UK and within Japan are largely explained by genetics does not - in and of itself - entitle us to conclude that the difference between the UK and Japan explained by genetics. Armed only with that information, we cannot decide whether the difference between the two populations is largely (or entirely) explained by (say) diet rather than by genes. Neither conclusion is ruled out or established by the fact that height is highly heritable.

So next time you hear someone observing that “Jews are clever with money” or “Black people make good runners and have a good sense of rhythm” or “Asian people are highly intelligent” or “Hungarians are good at chess” or whatever, please bear in mind that, even if such claims are statistically true and even if being good at handling money, running, playing the drums, and playing chess are highly heritable, it doesn’t necessarily follow that Jewish, Black, Asian, or Hungarian genes have anything much to do with the observations made.

It should, perhaps, also be added that (let’s play safe here and take the most innocuous example) even if there are genes for being good at chess and these really are more common amongst Hungarians and this “fact” really does explain Hungary’s historical prowess in this field, the implications for social policy are very limited. After all, we know that men are better at running than women and that this fact is explained by biology (men are, after all, taller than women); but if you had a requirement for a fast runner and Paula Radcliffe and I applied for the job, I rather think it would be a mistake to be guided in your choice of candidate by your knowledge of general biology and gender.

In short, neither reason nor science do (or could) lend any support to racism (or sexism).